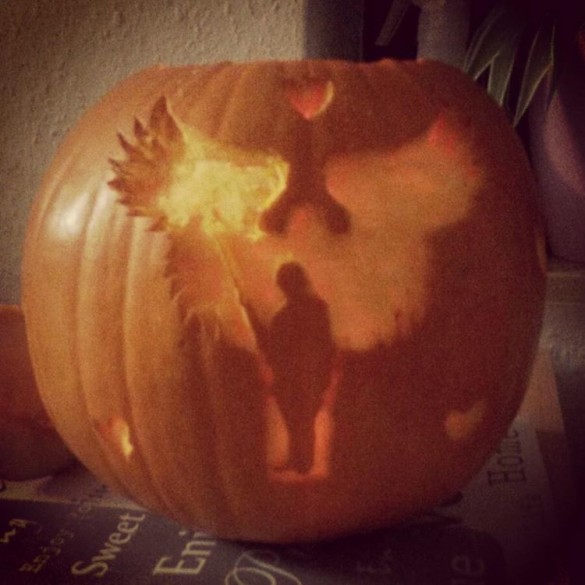 I just wanted to wish everyone a wonderfully spooky and fun-filled Halloween! For Germany it is Reformation Day so everything is closed and although stores are trying to cash in on dressing up, Germans generally don’t celebrate Halloween. In the UK, we dress up, go to bars or parties and kiddies might do the trick-or-treat thing but that part isn’t as huge as it is in the US. Still, it’s a lot of fun. One day I’d love to experience a Halloween in the States and go to town on decorating my house, myself and just enjoying having kids knock on my door for sweets!

We never carved pumpkins though until I was in my early 20’s but now I do it every year. It’s fun and actually relaxing at the same time. I don’t like horror or scary stuff generally but I will make allowances for Halloween but my pumpkins end up being pretty ones haha or little creative works of art. Hmm I need to work more on my evil side bowahahaha!

I’ve carved a couple now and I’ll show you in this post. This year however, I decided to carve the Soldiers’ Angels logo. I became an Angel Volunteer this September and I love it! I’ll write more about that in another post but basically I love the US and UK military and am a proud supporter. My family are/ were in the British Army and Royal Air Force and I have a close friend in the US Marines. My first kiss at 16 and first boyfriend at 17 were both US Army Infantry! (What can I say? It’s the uniforms, that sexy hair cut and the accents!) Anyways, I am an Angel Volunteer for the Letter Writing Team and we write to US troops deployed to raise their spirits a little and tell them that we love them, that they matter and what they are doing is important. To share the love and respect we have for them and just to brighten their day and make them smile. So in honour of my new found love that is Soldiers’ Angels, I carved the Soldiers’ Angels logo into my pumpkin. I think it went pretty well if I do say so myself!

I hope you have an amazing Halloween and stay safe! Remember stranger danger! Oh, and if you have leftover Halloween candy- feel free to donate it to the troops! Click the link below for more info! Thanks guys and girls!

Donate Halloween Candy to US Troops

Why I call myself a multipotentialite

My name is Charlie and I’m a food addict

20 Random Facts About Me

31 tips to spice up your relationship